The popular billionaire girl and Disc Jockey is currently trending on social media after sharing a photo of her Pink House in London.

An inscription on the wall of the house was in honor of the billionaire daughter as she was welcome home. 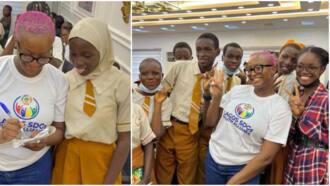 Secondary students blush as they meet Cuppy, take selfie with DJ as she donates N7m

One fan, however, pointed out a particular chess design in the house.

“Hello @cuppymusic, some chess pieces are on the wrong squares.”

Cuppy responded by telling the fan to report her to Nigeria’s anti-corruption body, the Economic and Financial Crimes Commission.

“No way?! Oya report me to @officialEFCC.”

Nigerians have since taken to social media to react to DJ Cuppy’s tweet, Legit.ng captured some of the reactions, see them below:

“Don’t answer them girl. They’re not worth it. It’s free publicity.”

“Cuppy! So you couldn’t even stay 4 Easter! I’m not your ‘cupcake’ anymore. I ‘Uncuppied you.’

“Why don’t you talk about this one when you dey naija.”

“There are people that prisons can’t hold and you are one of them.” 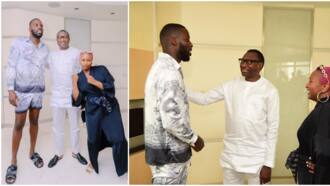 “For really, it’s cringe-worthy to watch..”

DJ Cuppy has melted the hearts of many on social media after sharing an emotional post on his Instagram page.

The Oxford University student who is currently in Lagos had the opportunity to meet an 18-year-old who took care of the backstage during one of her photo shoots.

Cuppy, while sharing a video of their reunion, said God wanted her to meet the lady identified as Tobi in order to change her life for the better.